I am fascinated with antique artifacts, the way they can speak of mastery of lost peoples, places, and cultures. This inspires me to create works that both radiate history and capture my own place and time. I work toward a clean aesthetic that celebrates the masterful simplicity of antique Far Eastern pottery, while retaining the modest utility of colonial American wares. The surface of my pottery is meticulously carved with intricate designs that borrow from nature and incorporate the human touch. Much of the carving on my work is informed by pattern languages found in indigenous fiber art, such as Hawaiian tapa, Incan cordage, and Zulu basketry. 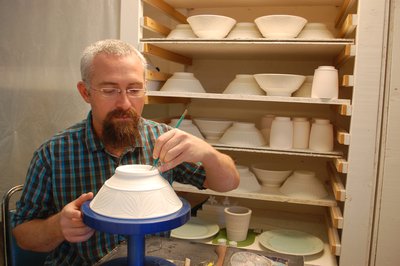 Born and raised in Colorado, Adam earned his BA in art from Fort Lewis College. For two years, he immersed himself in the culturally rich art scene of the San Francisco Bay Area, where he began his full time studio practice. From there, he relocated to Maui, where he established a thriving studio business. He spent most of 2008 in Icheon, South Korea, studying traditional Korean pottery making techniques under 6th generation Onggi master Kim Ill Maan. In 2013 he created and premiered HIDE-N-SEEKAH at the NCECA conference in Houston, TX. After maintaining his studio in Durango, CO for 5 years, Adam moved to Helena, MT in 2013 where he was a long-term resident artist at the Archie Bray Foundation for Ceramic Arts. Adam is now a full time studio potter in Helena, MT. His Works are included in private collections and kitchen cabinets internationally.