The archetypal function of the clay pot is that of a container for physical, tangible objects. My work is based on the premise that the clay vessel is capable of more than holding fruit, presenting flowers, or decorating a sideboard, and that there are additional functions of the vessel, such as containing the intangible (light, shadow, idea). My urban environment, Modernist architecture, backyard forts, Gordon Matta-Clark, 19th century European porcelain, Minimalism, Bugs Bunny, and Song Dynasty porcelain all inform and affect the work. Although the formal architecture of the pot remains intact, the work is uninhibited by the pragmatic issues of function, thus allowing the creative exploration of the artistic potential of the vessel format. The juxtaposition of glazed and unglazed surfaces combined with industrial textures not typically associated with porcelain produce a tension in the work, and is at odds with porcelain’s implicit societal qualities (upper-class association and assumption of purity and preciousness). The intimate scale of the work draws the viewer near, creating a more intense and personal dialogue. By leaving evidence of the process of making and using the concept of function as a starting point I allow the viewer an insight for initial interpretation. 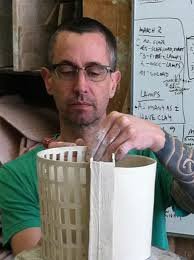 Bryan received his Master of Fine Arts in Ceramics in 1995 from SUNY New Paltz. He currently is a studio artist and ceramics instructor in the Buffalo area.