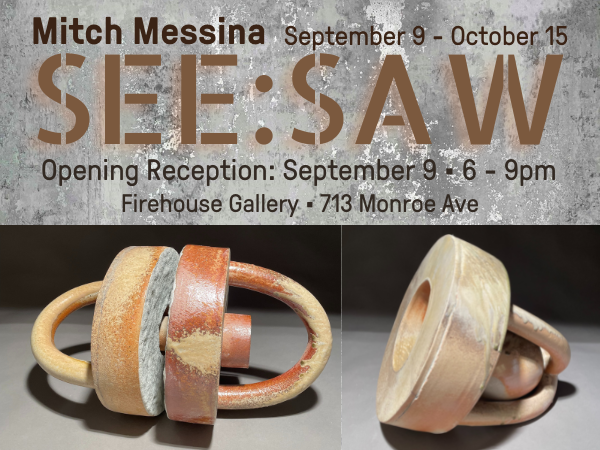 Stop by our Firehouse Gallery on Friday, September 9 from 6 - 9pm for the Opening Reception of SEE:SAW featuring the work of local ceramics artist Mitch Messina. The show will be up until October 15.

This event is free and open to the public. Mask wearing and proof of vaccination are required.

Artist Statement: My current work represents a new departure using wood ash and glazes on wheel formed objects. My sculptures attempt to invoke an ongoing dialectic conversation about familiar and unfamiliar forms and their meanings with the viewer. These reminiscent industrial based objects engage the viewer to arrive at comparisons between the contradiction of handmade versus machine made. This new work uses the traditional method of firing pottery using wood to reach optimum temperature. I believe this serves to infuse the emotional, natural and spiritual into hard edge objects known to be devoid of the human touch.

Artist Bio: Mitch Messina began his journey with clay as a High School Student in Beaverton, Oregon. He studied ceramics arts at Portland State University and the Tyler School of Art. While studying in Philadelphia, he developed an interest in the pre-industrial tools collected and preserved by Henry Mercer, an early 1900’s artisan and archeologist in Doylestown, PA. The concept that tools have marked stages in human development from primitive existence to current levels of technology continues to drive the force behind my ceramic and mixed media sculpture. After receiving his Master of Fine Arts in 1986, he taught at numerous colleges before moving to Rochester in 1990. Currently, he is in his thirtieth year as head of the Ceramics and Sculpture departments at Nazareth College and teaches on both the Graduate and Undergraduate level. His artwork has been exhibited in many group and one-person shows, including solo exhibitions at the Clay Studio and the Snyderman galleries in Philadelphia, PA and regionally at the University of Rochester, Roberts Wesleyan, Monroe Community College, Fingerlakes Community College, Saratoga Clay Art Center, and Main Street Art Center in Clifton Springs, NY. Recent group shows include Looking at Ourselves at the Baltimore Clay Works, The Clay National in Louisville Kentucky, and Craftforms at the Wayne Art Center in Wayne PA. Locally his work can be seen in a permanent installation of three sculptures at the Village Gate Complex in downtown Rochester. His sculpture has been reviewed in Sculpture Magazine, and featured in Ceramics Monthly and American Craft magazine. Publications include Making Ceramic Sculpture by Raul Acero and Hand formed Ceramics by Richard Zakin. He received the Evelyn Shapiro grant for ceramic excellence in 1991 and was awarded the Excellence in Teaching Award from Nazareth College in 1995.